Editing video on a PC, below the professional level, has been dominated by Adobe Premiere Elements and Corel VideoStudio (formerly Ulead VideoStudio). But there have always been other worthy alternatives, and one of the most capable is Sony’s Vegas Movie Studio. With each version, Vegas has improved, and now Sony hopes to give Vegas’s eleventh incarnation a jump on its competitors by adopting a major feature they don’t have yet.

The big news is that Vegas 11 now supports editing of stereoscopic 3D footage. There still aren’t that many camcorders available which can shoot this format, with just a smattering of models available from JVC, Panasonic and Sony, such as JVC’s Everio GS-TD1, or Panasonic’s HDC-SDT750, HDC-TM900 and HDC-SD90. But YouTube now supports 3D, and it’s becoming a tickbox on HDTVs as well. So there are plenty of options for watching 3D already. Up until now, though, all you could do with 3D footage you shot yourself was preview it, maybe trim the clips, and then play it back.

With Vegas 11, you can import 3D and edit it on the timeline, just like regular 2D. However, this isn’t a completely seamless process. First, you need to open the Properties panel for your Project and enable one of the Stereoscopic 3D modes. Options include full- and half-frame side-by-side, anaglyphic, line only, or just the left or right frame. However, this just refers to the way the 3D is shown onscreen, not how to interpret the files you import. You can also output 3D to an external device, including a secondary monitor or stereoscopic display hardware.

Further aiding its adventures into the third dimension, Vegas 11 now supports MVC and MPO file formats, which are respectively stereoscopic 3D video and still image files types. However, we found Vegas 11 didn’t automatically detect side-by-side AVCHD from either JVC’s Everio GS-TD1 or Panasonic’s HDC-SDT750. Instead, we had to select each clip individually and tell the software to use the appropriate half-frame side-by-side setting, which was rather laborious for a folder full of footage. Also, when we tried to import the GS-TD1’s MP4-based MVC, Vegas 11 could not interpret it as 3D, which is a shame because this is currently the best quality 3D available at the consumer level. 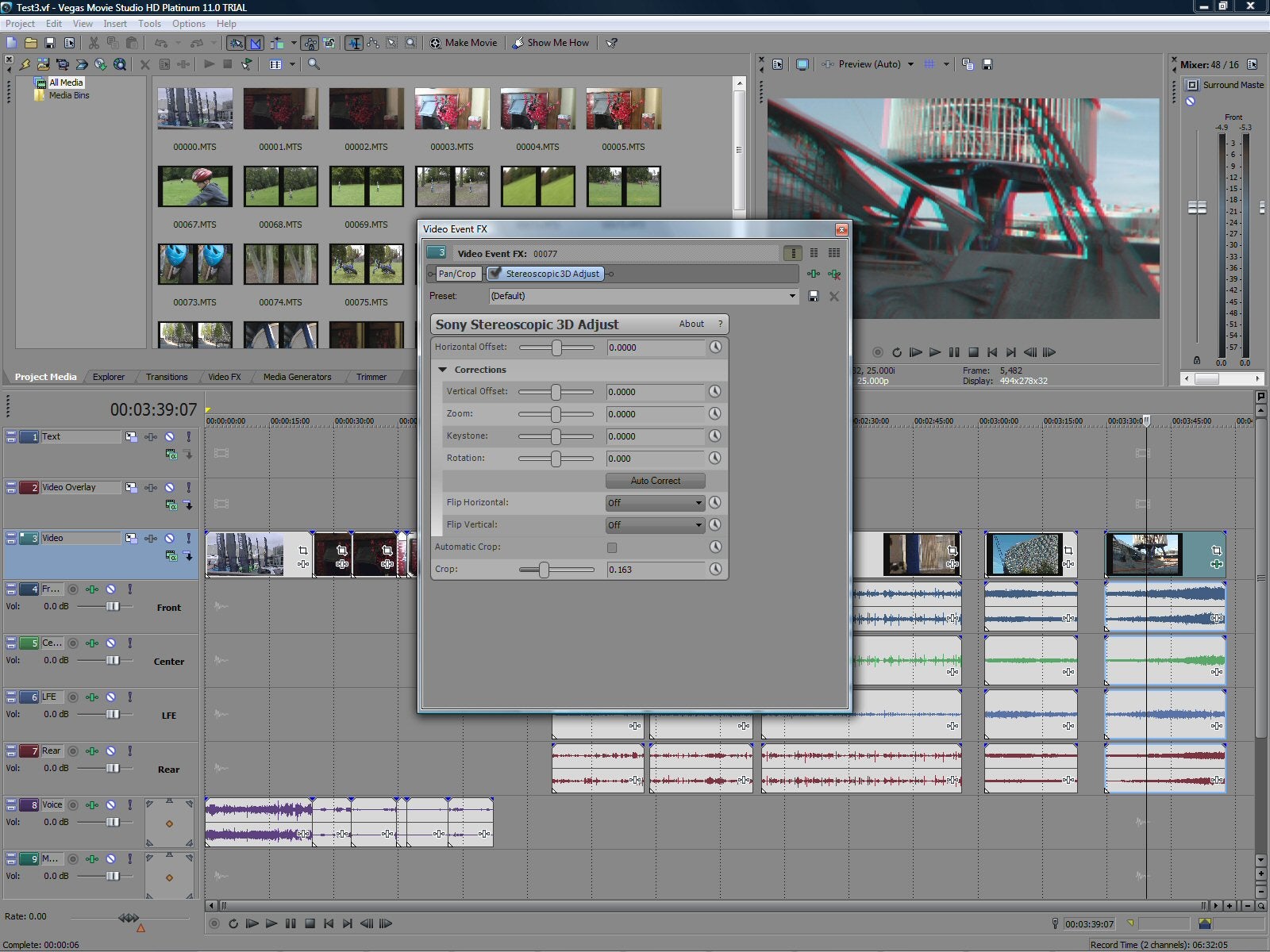 When you’ve imported your 3D and set it to display the way you want, you can edit it as normal. The full gamut of video filters can be applied, and you can switch to viewing just one of the sides to adjust colour and perform other corrections more accurately. You can also tweak the 3D effect itself using the Stereoscopic 3D Adjust filter. This provides a fair amount of control, including alteration of the vertical and horizontal offset, zooming the clip and cropping into the frame (which is handy with Panasonic’s version of side-by-side 3D, which doesn’t use the whole of the frame), keystone, rotation, and flipping the footage horizontally or vertically. To help with these adjustments, you can view the 3D effect by switching the project to anaglyphic mode and donning the coloured glasses supplied in the box.

To go with the 3D video, Vegas has support for 5.1 soundtracks imported from camcorders with this recording option, although this has been around for a while. Surround sound editing is relatively basic. The project will automatically give you the option to switch to 5.1 mode, and then the various audio signals will be loaded into their own tracks so you can adjust their volume independently. We found Vegas could cope with Dolby Digital 5.1 audio from non-Sony camcorders just fine. However, whilst you can adjust the surround positioning of stereo tracks, the component tracks of a 5.1 signal can only have their volume altered, not switched within the positional soundscape.

Sony has also added support for frame rates other than the usual 25 per second (in Europe) and 30 per second (in the US and Japan). Vegas will now work natively with 24p, 50p, and 60p footage. The first of these will mostly be useful to users of digital cameras that offer this frame rate, and further enhancing support for digital camera footage, the QuickTime AVC support has been improved as well. If you mix and match frame rates within a project, Vegas will handle this reasonably well, too. 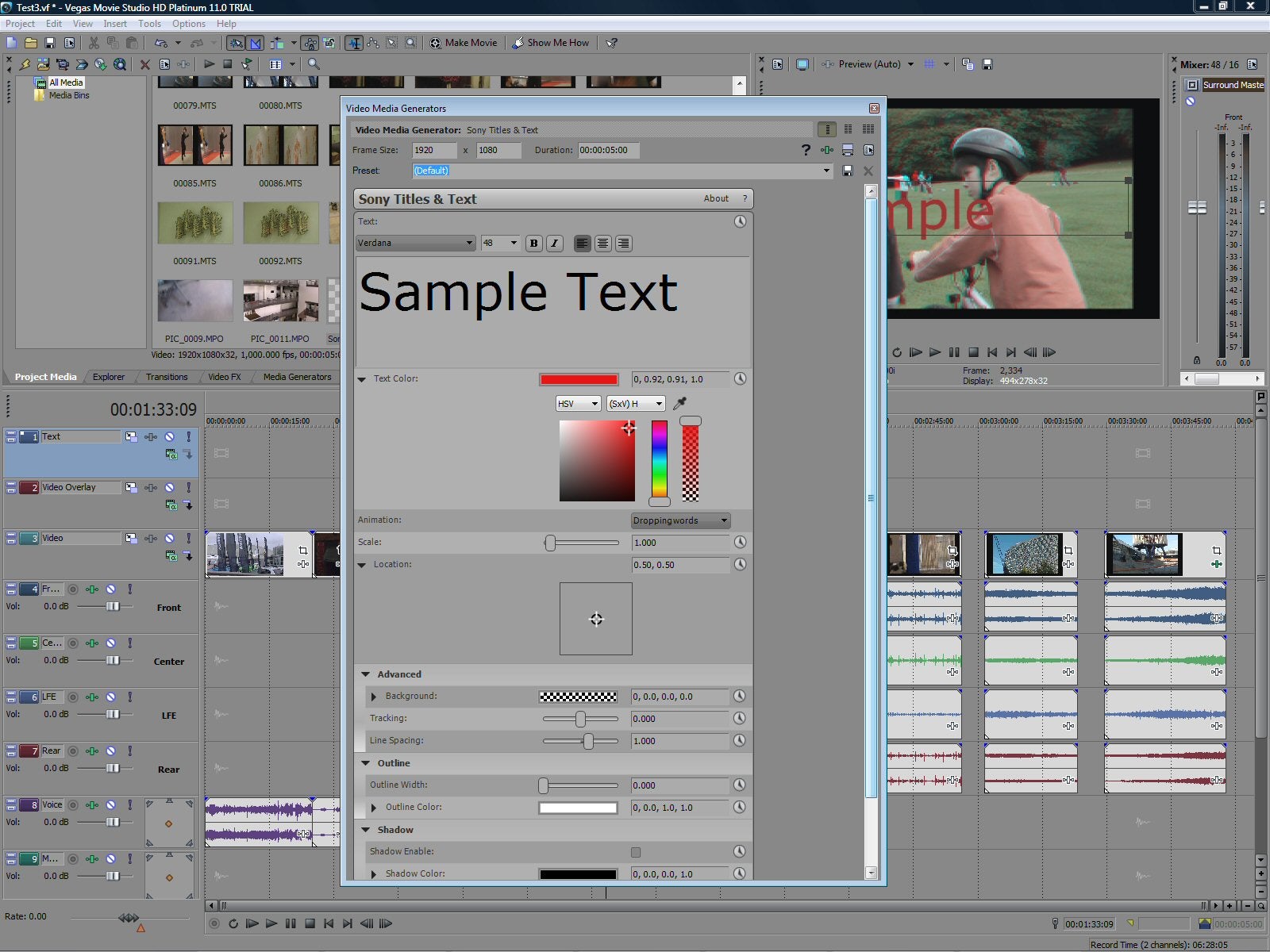 So Vegas 11 has some cutting-edge features, but the interface is still essentially the same. There are a few tweaks, though. The New Project wizard has been streamlined, so now you can choose a video format and name the project within one dialog. There’s now a Titles and Text plug-in, which is a new Video Media Generator, providing more sophisticated formatting tools and a variety of animations. Music soundtrack creation remains a strength, with 360 customisable options supplied. Fixing video problems is another area of strength, too. There’s a capable image stabilisation filter, plus a plug-in for adjusting white balance and another for secondary colour correction. In some areas, however, Vegas lags behind both Premiere Elements and Corel VideoStudio, with just 10 video tracks available, although the times when you might need more than this will be few and far between. 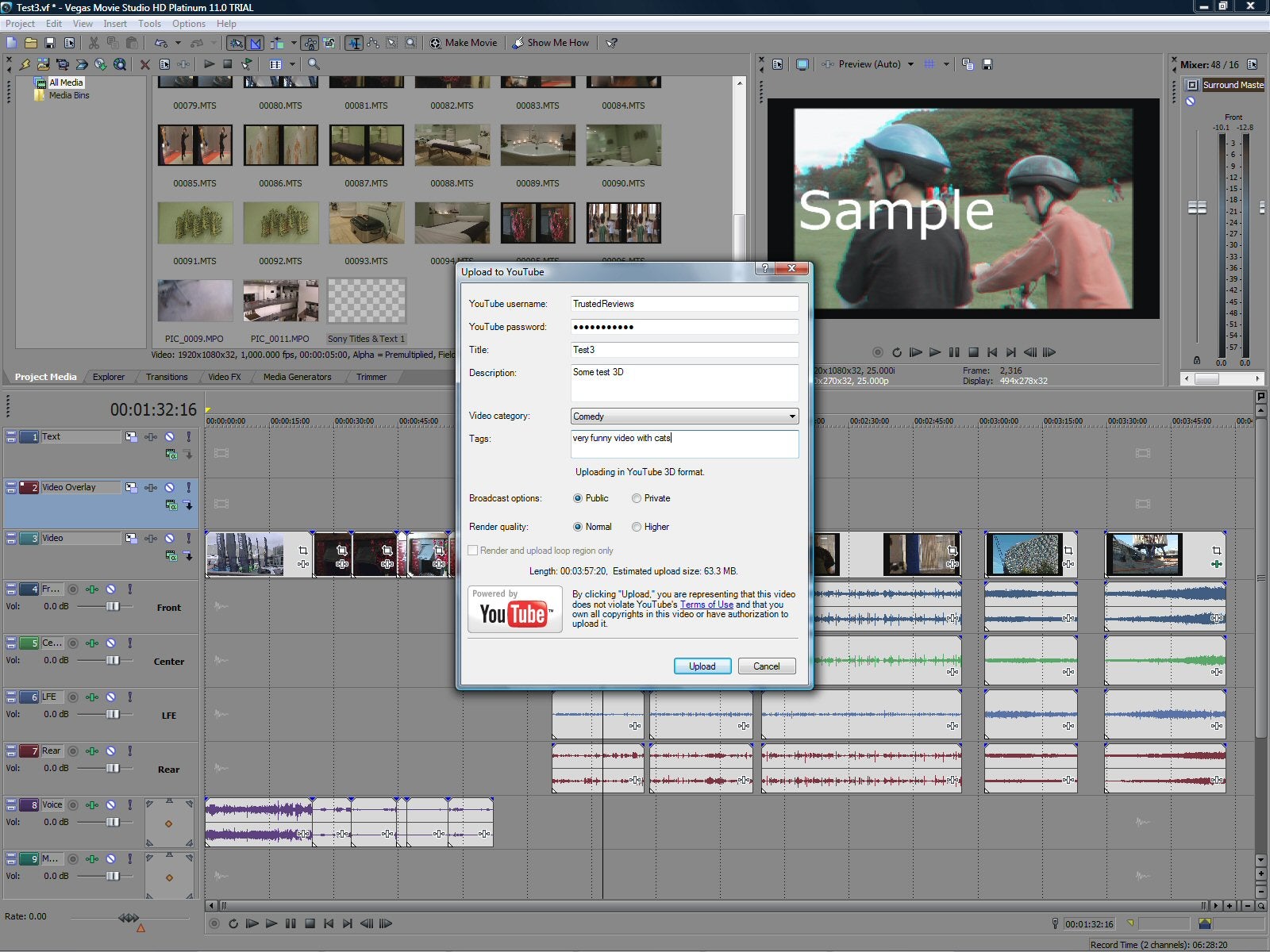 When you’ve finished your editing, the output options have been upgraded to match the new file support options. You can upload 3D straight to YouTube, with the correct tags inserted so the online service recognises the format and adjusts playback options accordingly. You can also burn your projects to 3D Blu-ray. AVC rendering is accelerated on NVIDIA GPUs via CUDA and ATI GPUs via OpenCL, although only with compatible hardware and driver versions.

If you’re not planning to edit 3D, Sony Vegas Movie Studio HD 11 doesn’t have a lot of new features to entice users of earlier versions to upgrade. We would also argue that its interface is still a little more opaque than even Adobe Premiere Elements. But it is a capable, well rounded package with a wealth of features, and worthy of consideration alongside the Adobe and Corel alternatives. There’s lots of editing power here, and if you want to edit footage shot on your shiny new 3D camcorder, Vegas 11 is currently your only choice.