You’d be forgiven for giving Google+ a lukewarm response when it was heralded as the new social network. Today’s Twitter is often tomorrow’s Bebo with these things, but after two weeks of using it, we have found it does some things incredibly well, and like many innovations you wonder why no one had thought of it before. Other features are sorely lacking and some are cause for concern.

A friend pointed out this week that being on Google+ was like turning up to a party very early, and while there’s some truth in that, our impression as we abstained from the nibbles in the kitchen is that we were in the right place.

It’s uncluttered and clean, and users are encourage to add contacts by putting them into “circles” rather than having one homogeneous mass of “friends”. When we first started using it, the idea of grouping your contacts into
categories seemed like a lot of work for something we didn’t need.
Wouldn’t life be simpler if we just put everyone in the same group and
we could follow everyone’s updates and broadcast to your entire
audience? Though it’s always too temping to say it in a technology review, the answer is “yes, but also no.” 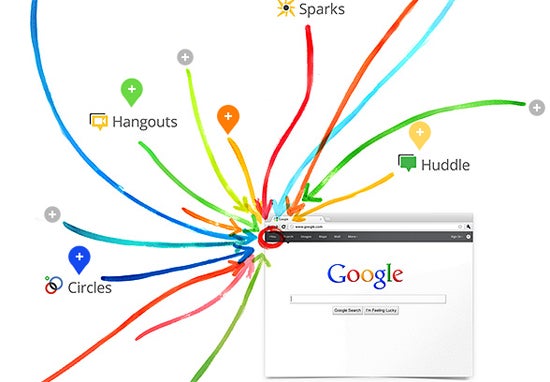 It’s easy to broadcast, Twitter-style, to all your collective followers, but while many people have a broad online profile, most of us, given the choice, would want to communicate with different people within that group in different ways.

Sometimes you want to broadcast a message about work-related activity, but don’t want to bother your drinking buddies about the pork belly futures. You could get around this by logging into LinkedIn, then back into Twitter and possibly Facebook, but it was all a bit of a faff. 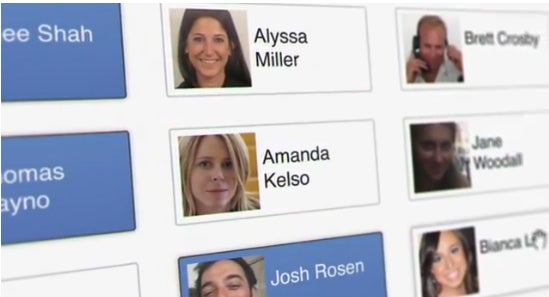 By placing people in circles, you can select messages to be seen by people within a designated audience group. This can mean your Manchester United supporting professional contacts won’t see you swearing when Rooney put two past the team you support.

You can also choose to view the updates of all your contacts, or turn on particular circles to see only that stream. This reduces the level of noise in your feed to the updates of a selection of people you follow.

If this sounds complicated, then we’re doing it a disservice. It’s actually very easy to use and a pleasure to read. The interface also helps, as it’s very easy to drag and drop people into various circles. Unlike Facebook’s ugly scroll-and-tickbox selection, Google+ uses a more elegant drag and drop approach similar to Flickr galleries or moving files to different folders.

On top of this, you get the impression that Google+ are going to leave Google alone, unlike Facebook which changes the interface, page layout, privacy rules and functionality like a supermarket moves the bread.

Privacy is less of a concern with Google+ because there is less of an emphasis on creating a profile page. It’s possible to build a profile and include video and photos of yourself and check in to places on maps, but many people using Google+ in these early days have started with just a user name and a blank image, whereas Facebook encourages, and in some case demands more personal information that you may not want to keep server side or broadcast on a profile, and that’s after you have figured out the default privacy settings and opt-out options.

What did ring alarm bells in Google+ was the user’s ability to change their posts in a conversation thread. Whereas Facebook and Twitter only let you delete comments after they are posted, Google+ allows you to edit your comments after they have been posted.

This led to some funtime character assassination in TrustedReviews when this conversation: 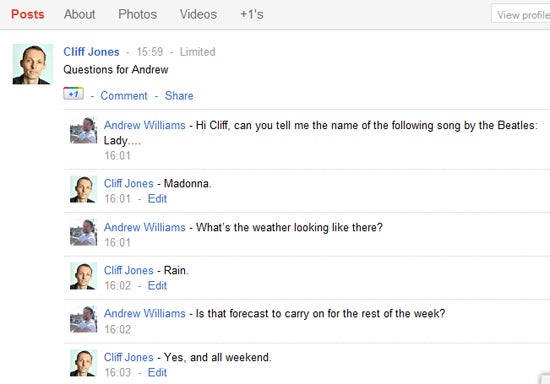 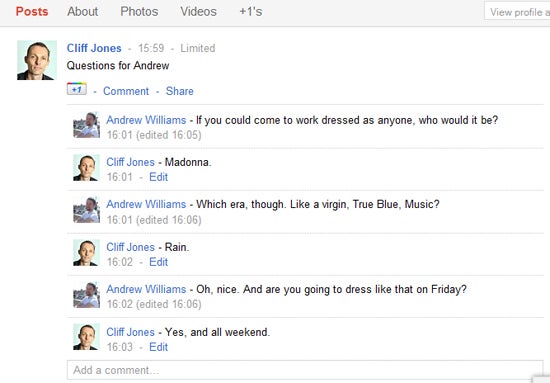 So it’s very likely our colleagues in the office would see this, and people in the wider tech industry where Andrew and I share contacts. If he wanted to be really mean, he could look at my contacts and add all of those people to the circle in which the conversation took place and I wouldn’t know they could see our conversation, because at the time of answering it things were different.

We like the lack of clutter in Google+, both in terms of design and content. Apart from Circles and the Huddle functionality which allows users to create the 21st century equivalent of Internet chartrooms, the service has been spared a landslide of products.

Thankfully absent are Facebook-like “fan” pages, the online shrine for users who like a particular product, company or topic. We’re sure Stephen Fry will attract followers in droves as an individual/brand, but gone are the issue-based pages for people who think bad things are evil and want to ban that kind of thing while they keep talking about it to everyone they used to be real friends with.

The final notable product within Google+ is Sparks, a source of links and clips around a particular interest which adds a human interest to the giant’s search functionality. 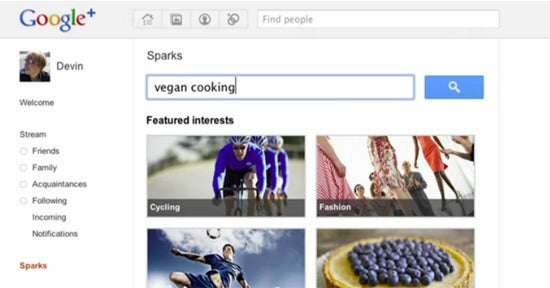 The clean and simple functionality of Google+ translates well into its iPhone app, which launched this week, although some functionality is missing. For example, users can’t manage email alert settings or edit their profile.

We can already see ourselves not using LinkedIn and posting more niche (but childish and amusing) posts on Twitter when they can be tailored and sent out to a suitable lowbrow audience.

Google+ will without a doubt improve functionality including better search and closer gmail integration, and developers of third party applications like Reeder and Instapaper may allow the ability to share on Google+.

Currently, there is a Chrome plugin which allows users to share to Google+, but other browsers will catch up, and websites will introduce 1 pages at the bottom of articles alongside the usual social media tools.

The success of Google+ ultimately depends how well the company can reward a loyal audience with the right service. While the company hasn’t always hit the bullseye (see Buzz and Wave) this feels like the right platform with the public support to make it a success. It’s like Twitter with noise cancellation and Facebook with auto-focus. We’re not assuming social networking is for everyone, but we think Google+ will find a wider audience to attract a large userbase to make it fly.