Do we really need any more ways to connect with people? Are
we not sufficiently catered for already with a plethora of instant
communication networks for us to talk with whoever we want to – in a way we
want to? Well, according to Facebook (and Google), the answer is a resounding
No.

Mark Zuckerberg last week
launched a new-look Facebook Chat, which now allows for Group Chat but all the
headlines went to the eye catching video-calling feature. Though how
eye-catching this feature really is, remains to be seen.

Facebook video-calling powered by Skype is essentially all
about convenience. It is the ease of use of this new feature which will be its
biggest selling point, but once you get beyond that, does it really offer
anything new?

First off, lets look at how you go about getting the feature
installed.  Facebook claimed at the
press conference that installation was a quick and easy process that would take
less than 30 seconds, no matter what system and broadband connection you were
using. A bold claim.

A claim however that seemed to be backed up, when we managed
to download the Java plug-in needed to activate video-calling within 15 seconds
and had it up and running within a minute. It all seemed very easy and straight
forward, which is key to making any new feature on a social network appealing
to the masses. You don’t even need to have Skype installed on your computer to
allow this to work. However having spotted a few tweets over the weekend about
problems installing the plug-in we decided to try it on another computer to see
if it would be as easy.

Initially we used a
MacBook Pro (2010) running Mac OS X 10.5.8 with
Firefox 5, and had no issues, however we ran into trouble when we tried it out
on an older laptop. Using a
2008 MacBook running Mac OS X 10.4.11 and using Firefox 3.6.18 we were unable
to set up video-calling. Having visited the http://www.facebook.com/videocalling www.facebook.com/videocalling site and
followed the instructions, we got an error message saying an error had
occurred. When we clicked the Try Again button, a .jar file was downloaded to
our desktop. When we ran the program a progress bar appeared but soon another
error message appeared stating: “Video calling has encountered an error
during installation. Please try again later” 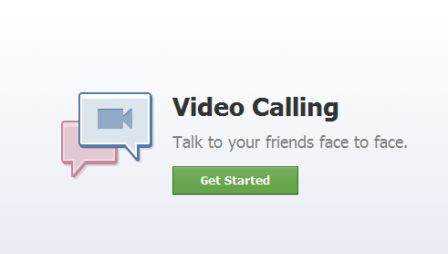 Despite numerous attempts we were unable to install the
plug-in. We tried using Safari but got a similar result and since the laptop
had a version of Mac OS X which Chrome doesn’t support, we couldn’t try it on
that browser. Looking at the Facebook Help Center, the only explanation we
could find was that Facebook suggests using the latest versions of any browser
and as a result older systems will not be supported. If this is the case, it
could curb the amount of people who will be able to use the feature, though for
most people using newer versions of the browsers, the system should work fine.

Using Facebook video chat is very straight-forward and
intuitive. Having opened your Chat contacts and seen who is available to chat,
double click on that person’s name and at the top of the pop-up window you’ll see a new
video camera icon. Clicking on this will send an invitation to the person to
take part in a video chat. The person will receive a pop-up notification
(similar to the one you get in Skype) along with a ringing sound, if they
already have the plug-in installed. If the plug-in is not installed on your
friend’s computer they will be invited to do so, and you’ll be informed as to
what is happening.

Once all this is done, video calling works as you would
expect it to. While some have complained about the quality of the video
calling, we found it more than adequate while testing it for the past few days, with both sound and picture being in sync for the
vast majority of time we were using the service.

Once a call is connected, a
video window appears over your Facebook page with an image of the person you are calling
taking up most of the screen and a small picture of you in the top right-hand
corner. The video window can be dragged to a suitable place on your screen and
can also be re-sized. To end a call all you need to do is hover the mouse over the
window and a option to end the call will appear.

If you don’t have a webcam as part of your system, fret not
as you can still get in on the video-calling excitement but the person you are
calling will only be able to hear your voice while you will still be able to
see them. There are very few tweaks you can make to the video-calling feature
in Facebook as it has been designed with simplicity in mind and so it can be
used by almost anyone. With Skype powering the service, it didn’t surprise us
that the service worked pretty well. It has had years of practice at getting
video-calling right and has managed to bring that expertise to Facebook.

While we found the system very easy to use, there are
obviously some drawbacks. Currently the system is limited to one-on-one calls
and while Zuckerberg didn’t rule out adding group calling in the future, this
limitation will be a turn-off for many. With Google offering group calling
with its Hangout feature, we wouldn’t be surprised to see Facebook updating its
service very soon.

Overall the system works (for most computer configurations) and offers an
ease of use that regular Facebook users will find very compelling. Despite the system working, it still seems as if the announcement was a little rushed and could be a
reaction to the announcement of Google . If this is the case, video calling on
Facebook should get better in the coming months and if Facebook can build on
its initial success, it could have a very compelling feature on its hands.

David Gilbert contributed camera, computing and mobile reviews to Trusted Reviews between 2011 and 2016.
…